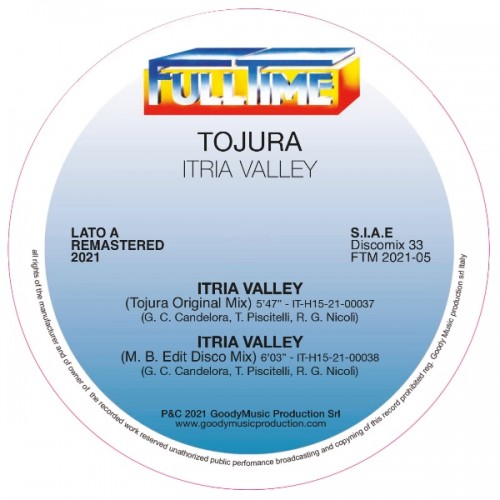 After putting out re-edits of two never released before tracks by the seminal italo band Rainbow Team, Tojura are back on Full Time Production with a fine brand new EP, ready for the years of the raving fans of the label. “Itria Valley” (in homage to the Apulia one) is such an irresistible modern disco number which receives a smooth treatment by M.B. Edit in addition to the Funk rework by Hector Romero & Ayala, followed by a Latin Afro Dub version delivered by Les Inferno that’s perfect for getting weird on the dancefloor during the later hours of the evening. These are 4 glorious tunes for grown-ups dancefloors.

This website uses cookies to improve your experience while you navigate through the website. Out of these, the cookies that are categorized as necessary are stored on your browser as they are essential for the working of basic functionalities of the website. We also use third-party cookies that help us analyze and understand how you use this website. These cookies will be stored in your browser only with your consent. You also have the option to opt-out of these cookies. But opting out of some of these cookies may affect your browsing experience.
Necessary Sempre abilitato
Necessary cookies are absolutely essential for the website to function properly. This category only includes cookies that ensures basic functionalities and security features of the website. These cookies do not store any personal information.
Non-necessary
Any cookies that may not be particularly necessary for the website to function and is used specifically to collect user personal data via analytics, ads, other embedded contents are termed as non-necessary cookies. It is mandatory to procure user consent prior to running these cookies on your website.
ACCETTA E SALVA
X